The residency is a multifaceted, year-long program that includes: 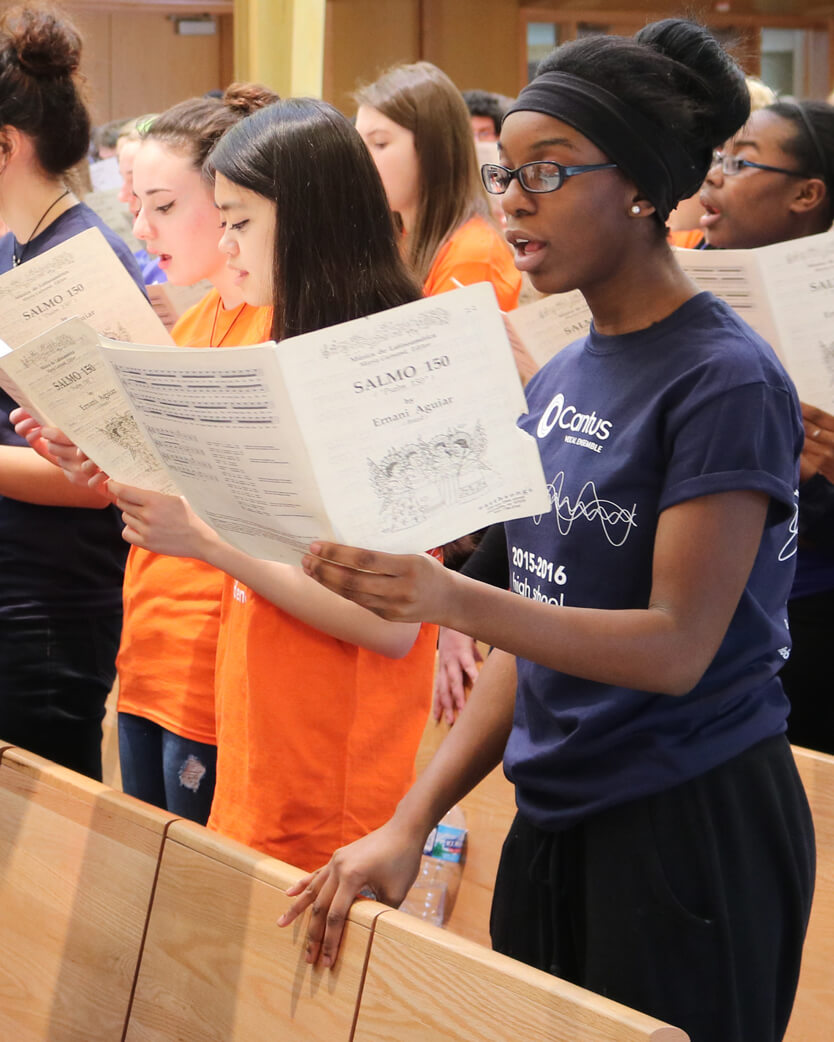 Do you have other questions about the HSR Program? Do you reside outside of the 1-hour radius of the Twin Cities? Let us know how we can help you.

Cantus’ High School Residency Program is possible thanks to generous support from Twin Cities Opera Guild and donors at our Cantus Idol Fundraiser.

BE A GUEST AT OUR REHEARSAL!

Cantus is unique among most vocal or choral ensembles as the members rehearse and perform without a music director. This collaborative work style allows Cantus to be flexible, adaptive, and ready to embrace new ideas that come from any member of the group.  The process leads to more commitment and conviction from each artist and creates an unsurpassed artistic product.

Want to know more?  Come and sit in on one of our rehearsals! You’ll have a chance to watch the Cantus rehearsal process up close, and at the end of the hour, the singers take a break for introductions and questions.

Come alone, with friends, or if you’re a singer, bring members from your choir! It’s FREE, but please fill out the RSVP form to let us know if we can expect you. With a reservation, we will send you additional information on where to meet and what to expect.

We’d love to see you!

Open rehearsals are made possible in part by the voters of Minnesota through a Minnesota State Arts Board Operating Support grant, thanks to a legislative appropriation from the arts and cultural heritage fund.

We are thrilled to announce our second annual Young & Emerging Composer Competition!

Cantus first began with four undergraduate students. They had passion, vision, and a desire to contribute meaningfully to the musical community. In our 2020-21 season, we are celebrating those student roots by providing an exciting opportunity for young and emerging composers.

Winner(s) will receive a $1000 cash prize. Honorable mentions will also be awarded. Winning compositions will be performed and recorded by Cantus and will also be considered for publication as part of a Cantus series. Compositions can be submitted in any language and must be for tenor and bass voices written at a level accessible to collegiate and high school choirs. Special consideration will be given to pieces that relate to the following themes: human migration, toxic masculinity, and mental health.

Submissions must include the following:

Applications must be submitted electronically by May 1, 2020. Please send as attachment to submissions@cantussings.org

Email submissions@cantussings.org and we’ll get back to you as soon as possible.

Grace Brigham is a composer specializing in choral and vocal music. She currently studies with Justin Merritt at St. Olaf College, where she also plays the violin and sings in various ensembles. In addition, she sang for five years with the Washington National Cathedral Choir, having the opportunity to perform for the likes of Joe Biden and Barack Obama. The Cathedral Choristers, as well as many ensembles at St. Olaf, are currently performing her music. After college, she plans to attend graduate school for choral composition.

In addition to the $1000 cash prize, Grace’s piece, Discoveries, will be performed during our 2019-2020 touring show, One Giant Leap and recorded by Cantus. It will also be considered for publication as part of a Cantus series with Graphite Publishing. 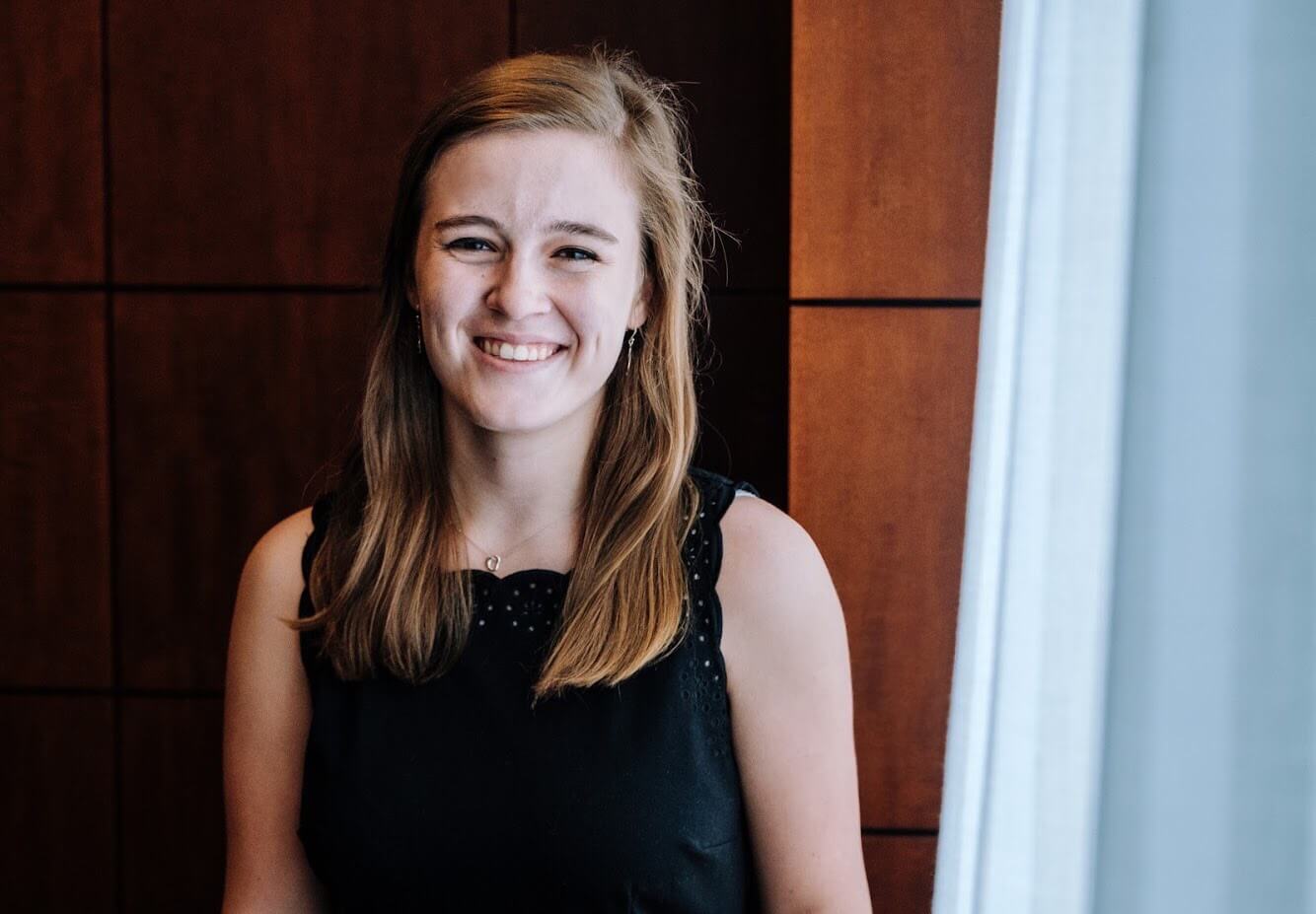 “The way of progress was never swift nor easy” – Marie Curie

“Very little can be done under the spirit of fear”
“We dream ‘til we no longer have the strength to dream those dreams against which we so struggle, those dreams go at last” – Florence Nightingale

“Prejudice is more violent the blinder it is” – Elizabeth Blackwell

“Fearfully, cautiously, and distrustingly must we take many of our steps, for we see a little way at best, and we can foresee nothing at all” – Maria Mitchell

“We have a hunger of the mind. The more we gain, the more is our desire” – Maria Mitchell

“Let each defeat be a source of a new endeavor, and each victory the strengthening of our spirit” – Euphemia Haynes

“The breath of a nation’s progress” – Maria Mitchell

Marie Curie (1867-1934) was a French/Polish chemist and physicist; she was the first woman to win a Nobel Prize, which she won twice in two different sciences. She studied radioactivity extensively and discovered the elements polonium and radium.

Florence Nightingale (1820-1910) is known as the pioneer of modern nursing. She trained nurses and treated wounded soldiers during the Crimean War, and later founded a nursing school in London. She was also a writer and social activist, advocating for (among other things) women’s rights and healthcare improvement.

Elizabeth Blackwell (1821-1910) was the first female medical doctor in the U.S., and the only medical school that accepted her did so because the male students there voted to let her in. She went on to give lectures advocating for female education, founded a hospital with her sister, and aided in organizing nurses during The Civil War.

Maria Mitchell (1818-1889) was the first professional American female astronomer. She discovered a comet in 1847, which she later received a gold medal for. After learning that she was paid significantly less than her male colleagues while working as a professor at Vassar, she demanded a salary increase and her superiors gave it to her.

Ada Lovelace (1815-1852), daughter of Lord and Lady Byron, was a British writer and computer programmer. She created the first algorithm to be carried out by Charles Babbage’s Analytical Engine, a proposed mechanical computer. She is recognized as the first to realize the full potential of computers.

Euphemia Haynes (1890-1980) was the first African-American woman to earn a PhD in math. She spent 47 years teaching in D.C. public schools and became the first female chair of the D.C. Board of Education. She was also granted the Papal decoration of honor by Pope John XXIII.

Gerson Batista (1988) is a composer, illustrator, multi-instrumentalist, poet and writer from Aveiro, Portugal. His piece, Playing with the Universe was the runner-up of our Young & Emerging Composer Competition and sets the scene as the opening song of our fall show, One Giant Leap! It takes listeners and performers on an epic journey through our zeitgeist using original text and complex rhythms and harmonies.

Batista began focusing on composition in 2016 and has won numerous awards in that short time, including 1st Prizes in competitions for Município da Lousada, INATEL–Associação FOLEFEST, Peças Frescas Açores, the National Arts Competition, and the Walter Hussey Composition Competition among others. 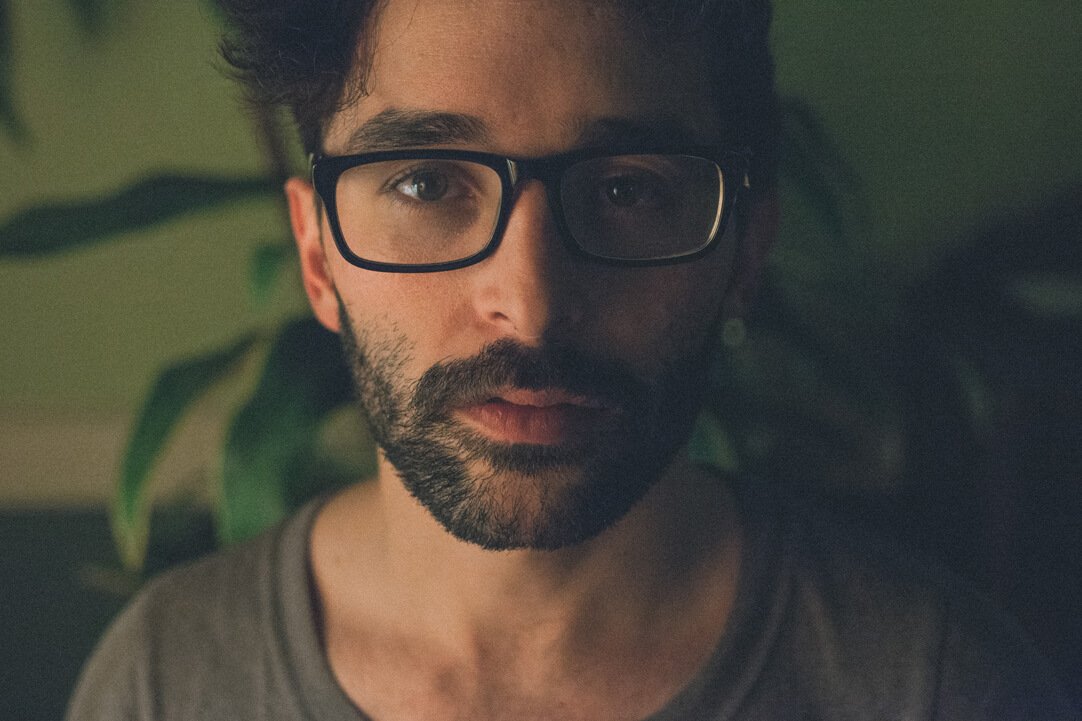 Text of "PLAYING WITH THE UNIVERSE"

Here we are
Living the now

Mirrors all over
sparkling in between the blocks
along the long trails of people
the stream of humans
the chain of thoughts
the divine string played by the mob
is moving forward,
towards the sky

Cars, planes,
signs, trains,
bikes and more
wandering around the stream
pulling back the floor,
oh rugged crowd
bread for the soul
the universe is loud,
let’s play its song!

At the first
emanation from Nature
in me
I felt the breeze,
it was you,
Mother Earth
the deep peace,
whispering in the ears
of those who know you